The following is an interview with Karen Carlson, a former trainer for the Best Buy corporation, and now an independent Training Designer and Facilitator.


Tell me a little bit about your background.
I worked for Best Buy for nearly 19 years, half in the retail stores and half at corporate. My training background mainly lies in developing and delivering engaging training sessions for retail leadership. Topics ranged from company culture to diversity to leadership development to facilitation skills and more.

What caused or inspired you to bring game shows into the training space?
I love to play games myself and always enjoy a little friendly competition. I found game shows and other interactive forums to be a great way to measure if learning is truly taking place without having to do former exams. What would you rather do: take a “final exam” or play a game?!?

Tell me a little bit about your trainees and training group?
Most of my trainees were new or existing leaders within Best Buy who were about to open a new store. Most participant were under age 30, likely even under age 25. My training groups ranged in size from 30 – 150 people from across the United States.

What was the game show experience like in your training classroom?
I created the questions (usually using the Jeopardy-style [Categories] game) based on the content of the 4-day training program. I facilitated the game as a closing activity on the last day of class, again to see what learning had taken place AND to end the event on a high-energy note. With large groups, I had the teams rotate so each person would at least get a chance at answering a question. If I saw that certain questions were consistently missed, my coworkers and I would reexamine the content to see if we weren’t landing that message appropriately or if the question simply wasn’t well written. The game show was always a very popular part of the program.

Getting into Gameshow Pro, specifically, what games did you use, and what are some examples of how they were used?
I usually used Categories [Jeopardy!-style] as it seemed to fit my larger group size better. We also used this in some of our department meetings to spice them up a bit, especially if a new initiative was rolling out.

What impact do you think game shows have on trainees/training?
It showed the trainees that training does not (and should not) simply be a download of information from one person to the others AND that training is fun! If you let the trainees know ahead of time that there will be some sort of a quiz, they are also likely to pay closer attention and take better notes. Since my audience would have to go to their home market and train their new employees, it also provided good examples of how they could bring life and interactivity to their training sessions – even if they did not have access to Gameshow Pro.

What advice would you give to other trainers either using game shows, or considering using game shows in training?
Keep doing it, or start doing it if you aren’t already! Everyone wants to learn, but no one wants to be bored by learning. Collaborating and interacting are important and necessary skills in today’s world. Game shows are an arena where these skills can be practiced in a fun, safe, yet somewhat competitive environment.

Anything else you'd like to share?
Anyone for a game of Scrabble?!?
Posted by Missy at 4:00 PM No comments:

The Game Show Effect
The remarkable way that game shows transform an event.
I, personally, am a little surprised every time a client is blown away by the effect of a game show on their event. Not that game shows aren’t amazing—it’s just that I’ve seen maybe hundreds of game shows at live events, and they’re consistently, predictably amazing. I suppose I’m a bit used to it.

Our client came up to me at the last show and said with awe and wonder,

“I cannot believe what a difference the game show made—it was like every time we introduced a round the energy in the room just shifted. All of a sudden they were all up and awake and looking at the screen and their keypads and whispering….”

I smiled and nodded knowingly and in agreement—because that kind of experience is what happens every single time we bring a game show into a live event. 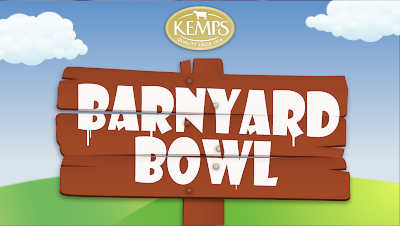 The aforementioned comment was made by an executive at Kemps—a nation-wide producer of all kinds of dairy products. Live Spark—our sister company—had designed the one-day event to have a game show running throughout the day.

They took our AllPlay software, and customized the screens, logos, timers, etc., to give it a totally unique and custom look for Kemps—but the base premise of the software remained the same: everyone in the audience had their own keypad to answer the questions in the game show. 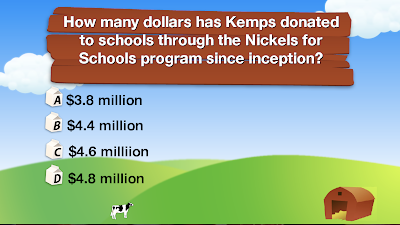 They were broken into teams—It’s Local, It’s Fresh and It’s the Cows (put together, all three teams form the Kemps slogan)—by the colors on their randomly-distributed keypads. 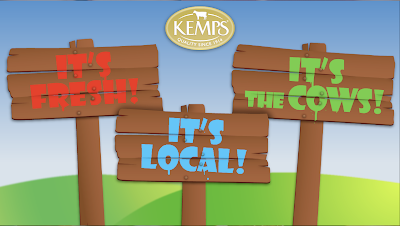 When a question and answer options were displayed on the screen, everyone input their answer on their keypads, and the percentage of correct answers was then added to the team score. This was displayed as an empty glass filling with one of Kemps’ major products: milk. 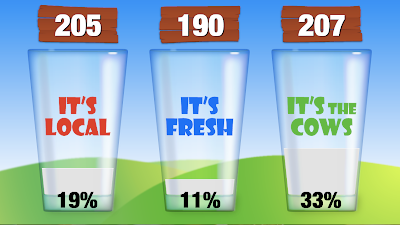 Each team had from the time the custom cow-timer at the bottom of screen started until she reached the barn to lock in their answers. 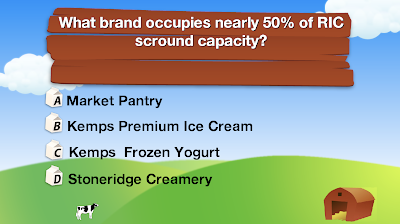 We played 4 complete rounds of three questions each. The first two rounds, the percentage of people that answered a question correctly on the team was added to the team score. 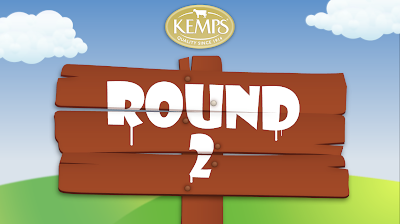 In round 3, points doubled. 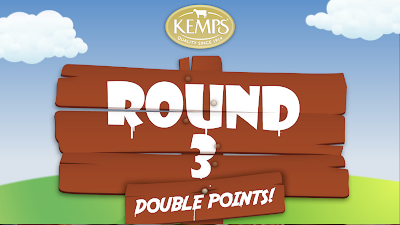 In round 4, they tripled—so that even a team who was behind had a chance to catch up till the very end. 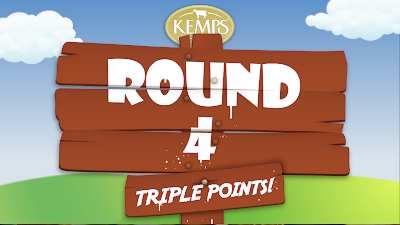 The game show ran throughout the day, and incorporated questions from the previous presentations.

The effect of the Barnyard Bowl was immediately and consistently visible. Each time a round was announced, the audience would sit up in their chairs; bodies leaning forward, reaching for their keypads and murmuring amongst themselves. It was like pressing a “refresh” button for the room, recharging everyone’s batteries after occasionally-dry presentations. After a question, the right answer would be revealed—inspiring cheers and discussion. Then, when the scoreboard came up and the glasses started to “fill” with the percentage of right answers, teams would cheer. Then one glass would stop and the others would go on, causing the cheers to get louder. Then the other glass would stop, revealing the top-scoring team for that question, and the room would erupt in cheering and clapping.

Rounds were played sometimes before and sometimes after lunch and/or breaks, reinforcing information and preparing the audience for content to come. But the greatest thing was walking out to a break after playing a round and hearing the halls a-buzz with game show talk. Audience members were talking about their teams, the questions they had just answered, and the content within the game show (and related presentation content). This means that the presentation material wasn’t just left in the room and consequently forgotten—in addition to energizing the audience and being a heck of a lot of fun, the game show was also reinforcing information and improving content retention.

At the end of the day, after the last round and as people were leaving, comments were flowing:

The thing is--we hear this each and *every* time we use a game show in a large event like this--whether it's a simple Jeopardy!-style Gameshow Pro game, or a customized AllPlay game.

The client came up to me after the event,

“The game show was a huge hit!”

And that speaks for itself.
Posted by Missy at 3:09 PM No comments:

Gameshow Pro already comes with 4 or 5 eye-popping game board skins, but every now and then we get a request for a customized design. We are more than happy to customize a customer's Gameshow Pro software to reflect a theme, their company design, a special event, or even their personal style.

The following screen snaps are examples of a custom skin that we made for FireApps including the game board, team display screen and question display screen: 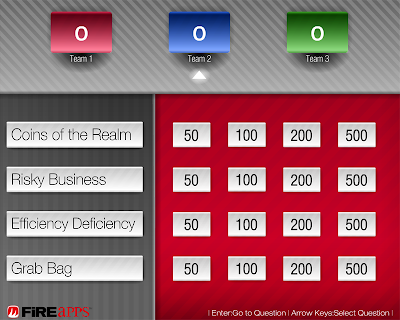 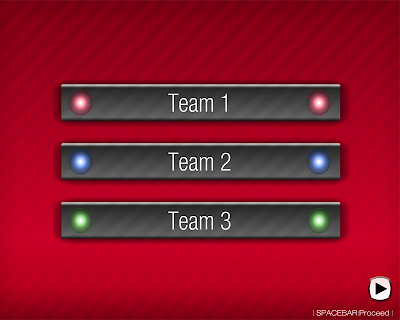 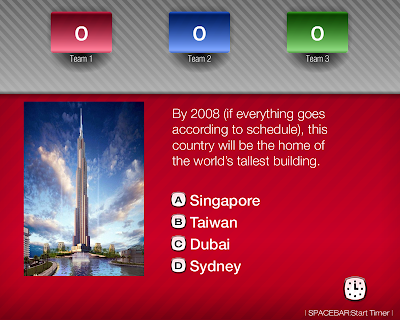 You can find out more about game skin customization under LearningWare Creative Services, or by contacting info@learningware.com.
Posted by Missy at 4:22 PM No comments: 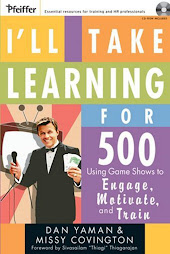